or make 4 interest-free payments of $20.00 NZD fortnightly with

(No reviews yet) Write a Review 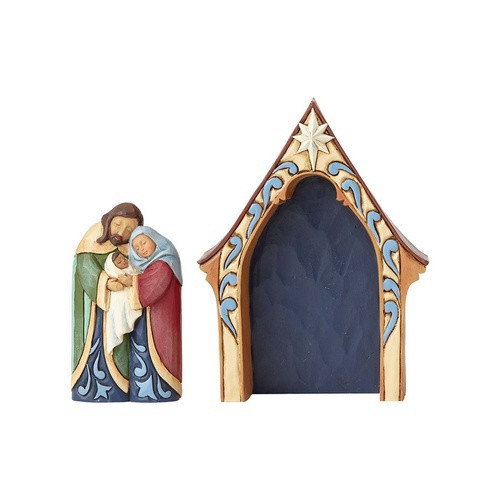 Self-taught award-winning artist Jim Shore is renowned for his figurines - and Christmas scenes are among his favourite subjects.

His figurines, ranging from nativity scenes and angels to regional themes and even Disney characters, are designed in Jim’s studio in South Carolina, USA.

Jim Shore trained as an engineer but learnt his art from his parents and especially his grandmother, who was a master quilter but could turn her hand to carving and other types of art. Jim says she taught him about form and about colour and balance.

Jim turns to his large collection of antique quilts when he’s looking for inspiration, and his signatures are intricate quilt patterns incorporated into many of his figurine designs, and a vibrant colour palette.

“I’m considered by many to be a folk artist, which isn’t exactly accurate,” he says in a video interview. “[But] the type of art that I do is… inspired by folk art.”

Jim has never attended an art class, but his figurines are sold around the world and are valued as collectables

Jim Shore figurines usually start as a detailed drawing, which is then coloured, before the object is sculpted and later moulded in resin.

Jim includes quilt patterns in many of the designs, scored or embossed on the clothes to add what he calls “an interesting twist”. And where the quilt patterns are used, they are chosen for their links to the figurine’s theme.

He also includes other pictures or stylised images on the figurine’s garments to link it to its design concept. The colours are a Jim Shore speciality, and he works to have finishes that make the figure exquisite.

Jim’s goal is to make something that “is absolutely beautiful”, knowing that one of his figurines will end up in a buyer’s home.

“Everything we do is based on an absolute pursuit of excellence,” he says.

"Away In A Manger" Mini Nativity: Jim Shore